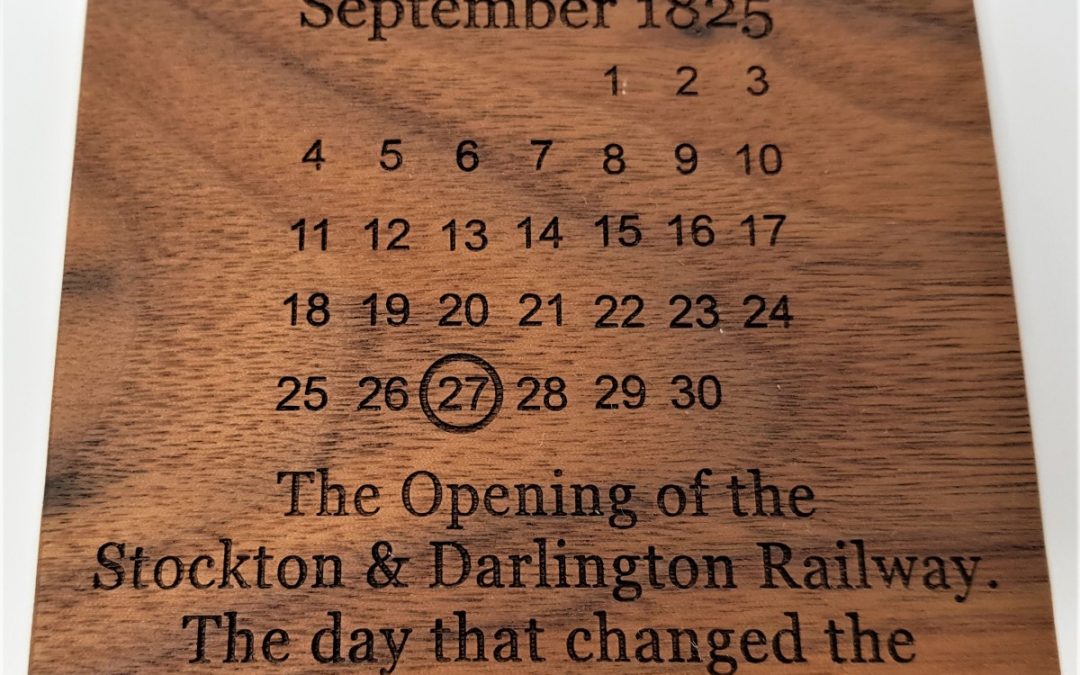 This week we have seen much about the 195th anniversary of the opening of the Stockton & Darlington Railway. It has been an odd set of celebrations, nearly all online, remote, socially distanced, masked and quiet. But what about 2025 – the 200th anniversary of the S&DR? It’s time to start planning. What do you want to happen?

The ancestors of the S&DR, the North Eastern Railway, The London and North Eastern Railway and British Rail, were all key in holding major celebrations of the 50th, 100th and 150th anniversaries of the opening of the S&DR. The nature of the celebrations in the past consisted of steam cavalcades, including that attended by royalty at Goosepool in 1925, stationary displays, banquets, conferences, speeches, huzzahs, toasts, production of memorabilia and many happy memories that captivated audiences from across the world and played a role in cementing the S&DR’s place in railway and transport history.

The S&DR will take to the world stage again in 2025 and can provide a lasting legacy of jobs, civic pride, more access to remains, healthy walks and a better environment along the S&DR corridor. We need you to help create a vision for 2025. Here are some ideas to start the process…

A Vision of 2025…On Saturday, 27th September 2025, a steam cavalcade will run between Locomotion at Shildon and Darlington bringing steam locomotives to the S&DR from all over the world. Visitors alighting at Bank Top station are greeted with welcoming banners featuring the faces of Pease, Stephenson, Hackworth and the first S&DR engines.  Plaques on the ground guide people into town on a railway heritage route which joins the familiar Darlington Circular walk at North Road. The tall glass hotel and apartments on St. Augustine’s Way has Locomotion No.1 etched on to its side as a permanent commemoration to the town’s railway heritage.

Part of Edward Pease’s House in Darlington is open to the public and links to fine walks from his partially restored back gardens, along the river to Skerne bridge, now devoid of its ugly pipes and fencing. The listed Railway Tavern is doing a fine trade collecting customers on their way to the museum. The North Road Railway Museum now has regular steam events in summer and students from the nearby S&DR engineering college pop into the museum café for lunch. This afternoon, students and the public will be able to watch the making of a new steam engine at the Hopetown Carriage works from newly installed viewing platforms.

This evening, a musical celebration will be held along with a recitation of the testimonial to Edward Pease in the shed at the museum. The first of the S&DR Awards for innovation in engineering and architecture are announced.

2025 will also see the launch of the new S&DR cross country marathon starting at Witton Park at 7am on the 27th September. Camera crews will cover the event across the world and reflect on the athletic achievements of 200 years ago that very day when the Robson lads ran alongside Locomotion No.1 from Aycliffe to Fighting Cocks.

BBC television will show its six-part period drama on Timothy Hackworth and visitors will flock to see the newly restored Hackworth’s House while the Hackworth holiday cottages are fully booked.  Visitors from across the world visit the restored excavations at the Soho Works and queue to see the objects found in Hackworth’s garden.

Invited guests wearing their blue sashes walk up to the attractive ironwork of the Gaunless Bridge, now re-erected at Locomotion and used as a viewing platform, from which the steam cavalcade can be watched. The conserved and restored coal drops, goods shed and warehouse look very fine in the late summer sun and ice creams are sold from the plate layer’s cabin. Chickens have escaped from Hackworth’s garden again and are scratching around the buildings looking for food.  Visitors queue to get a table at the restaurant for lunch at the Sunday School, while others settle for a snack at the Soho Cottages before walking into town to visit Hackworth’s grave and events at Hackworth Square. From Dan Adamson’s Coach House (they do nice teas in the garden) they catch the horse drawn coach through Hackworth Park back to Locomotion, buy their commemorative gifts (from us!) and alight on a train to Darlington or walk along Brusselton Incline towards Bishop Auckland ready for tonight’s showing at Kynren. Others stay at Shildon for the ecumenical church service to remember Hackworth, his family and the S&DR.

Preston Park Museum is running its fifth consecutive year of community excavations in its grounds and this year some owners of houses have agreed to garden excavations to find out how much of the cutting survives below ground. Staff and visitors at Preston Park wear top hats and ribbons ready to cheer the marathon runners on Yarm Road.

People arrive at various parts of the line by train, having enjoyed a series of on board events and refreshments. The sides of the trains are emblazoned with images of Locomotion No. 1, the Royal George, Sans Pareil and the Globe.

Another evening banquet celebration will be held at Stockton Town Hall to remember the day that changed the world and in celebration the Stockton Flyer peals every hour on this most special of days the 27th September 2025.