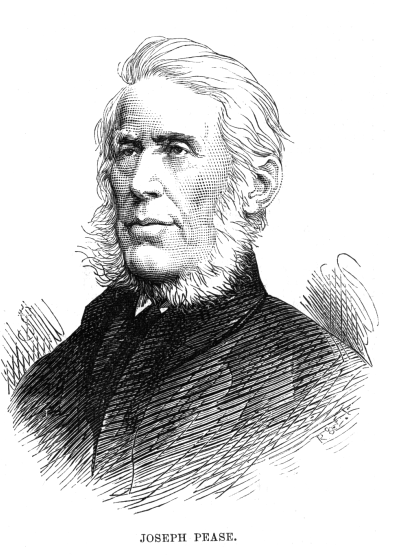 Joseph Pease (1799-1872) was the third oldest child of Edward and Rachel Pease. When he was 6 months old the family moved into a house on Northgate in Darlington and he presumably lived there until he married Emma Gurney in 1826.

He started his S&DR career at the age of 19, setting out the prospectus for the new railway company to encourage investors. He went on to become the Company’s Treasurer and oversaw the extension to Middlesbrough and subsequent improvements to the dock facilities between 1828 and 1830 [i] and he took over managing the company in 1829. By 1830 he owned more collieries than anyone else in south west Durham having acquired them in order to take advantage of the cheaper transport offered by the railway.

In 1832 he was elected Member of Parliament for South Durham but as a Quaker he was not permitted to take his seat – he refused to take the oath of office. Allowances were soon made, and he was able to take his seat in the House, but, refused to remove his hat when sitting in Parliament. He was prominent in campaigning against animal cruelty and in the fight against slavery.

His statue located near High Row in Darlington was unveiled on the 50th anniversary of the opening of the S&DR in 1875. The day was recorded by the Illustrated London News who featured several pages of illustrations including one used on our S&DR tea towel which features notable S&DR figures including Joseph Pease. You can read all about it here. In 1875 a commemorative plate was issued featuring the statue of Joseph Pease. You can read about this here.