What shall we do with our Dandy Cart? 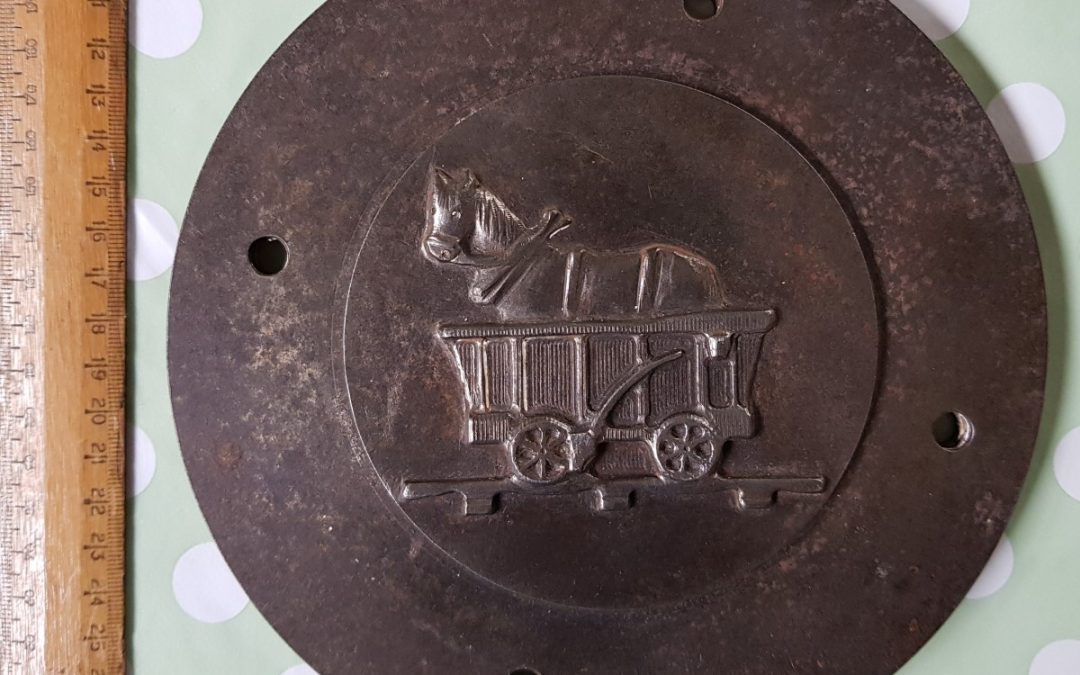 Yesterday I was given, on loan by a fellow Friend of the Stockton & Darlington Railway, a heavy metal circular plaque with a central boss of a dandy cart, complete with horse, in relief. We don’t honestly know what it was made for – possibly an apprentice piece. Anyway, it is an opportunity to use it to make a mould for something that references the Stockton & Darlington Railway. Any ideas? Maybe just a plaque to hang on a wall like a horse brass? A large medallion of chocolate?

Dandy carts were brought into use when the supply of reliable locomotives was simply not good enough in the early days of the S&DR. The use of horses to lead waggons of coal had been reducing but a series of locomotive breakdowns, explosions and general misfortunes resulted in the need for the dandy cart to plug the gap.

A horse was used to haul waggons uphill or along the level. When a downward run was reached, the horse was trained to jump into the dandy cart at the rear of the train, thus saving its energy by riding on the train instead of alongside it. Once the train reached the next level stretch, the horse got off the dandy cart, trotted to the front and pulled until the next downhill stretch. This process saved a lot of energy, and the horses were apparently quite easily trained and their condition improved.

The stretch between Shildon and Stockton was a gradual descending gradient towards the Tees, so the horses hauling four loaded waggons containing nearly 12 tons of coal with a total weight of 17 tons, could ride on the cart for most of that journey. The system was so successful, that it continued in use long after locomotive supply and reliability had improved, mostly on the branch lines (the Darlington and Stockton Times of September 6th, 1854, gives an account of the dandy carts in use at that date on the Haggerleases branch of the S&DR).

The increased use of horses in this period led to a loss in confidence in the locomotive amongst other embryonic railways such as the Liverpool & Manchester. Robert Stephenson wrote to Timothy Hackworth in Shildon on 7th July 1828 to ask why horses were being used after they had apparently been entirely removed from the line? Hackworth kept detailed notes showing that locomotives were more efficient and that horses were only to take what was left after engines had all been used. However it was an uphill struggle convincing them that the locomotive was the solution instead of the horse.

Meanwhile, if anyone has any ideas how we can use this lovely piece to make something else, do let us know. Or if you know what it was originally made for, then we would love to hear from you.