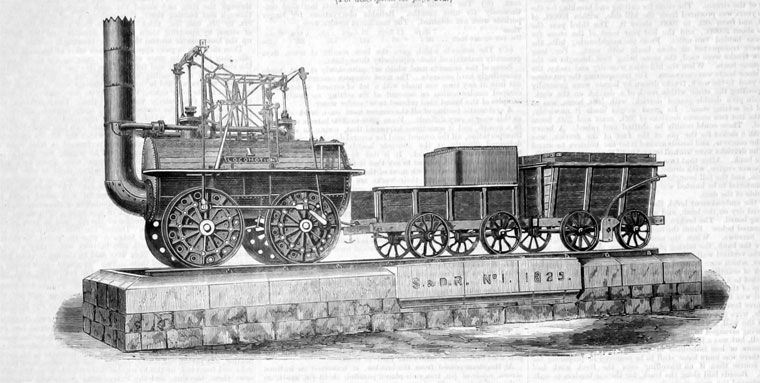 On this day, 16th September, in 1824, the S&DR sub-committee ordered two locomotive engines from Robert Stephenson & Co costing £500 each. The first engine was delivered in time for the opening day on the 27th September 1825 and was known as ‘Active’, but changed later to ‘Locomotion No.1’. The second, delivered a month later was named ‘Hope’ also known as ‘No.2’.

Locomotion No.1 was designed by George Stephenson as his son Robert was in South America. Hackworth was also involved in its design and construction while temporarily working at Robert Stephenson & Co, although to what extent is not clear. Hackworth went on to make a number of improvements to it once it became operational after the opening day, including designing the new plug wheels, less prone to breaking than the wheels supplied by Stephenson. Despite design problems and the occasional explosion, requiring the engine to be rebuilt and parts replaced, it continued to operate on the S&DR until 1846. It was then turned into a stationary pumping engine at Howden Station and fitted with pumps from Middlesbrough. It then moved to Pease’s West Durham Colliery as a pumping engine. Finally, at the behest of the Pease family it was restored and placed on a plinth at North Road Station in Darlington in 1857 to commemorate its historic significance. Locomotion No.1’s journey was not over though. It was moved to Bank Top Station in 1892, craned out and removed during the wars to protect it, then moved to the new railway museum in North Road Station in 1975 and now resides at Locomotion in Shildon.

Hope, or No.2, had a chequered career. Hackworth had to spend a week fixing it in Shildon so that it would work when it arrived on the S&DR. It made a bid for freedom along the riverside at Stockton in 1827 and was badly damaged. It was then involved in a collision in 1835 and was probably rebuilt by Kitchings in Darlington.

Locomotion No.1 features in a number of our gifts. You’ll find most of them in the Stephenson Collection ranging from the tiny glass fridge magnets at £3, pewter badges at £4.85, our beeswax candles at £18, our S&DR T-Shirt at £19.98 and our oak cheese or sharing platters at £30.  One of our mugs also feature a quotation from the local press describing Locomotion No.1 on the opening day – ‘she excited the astonishment and admiration of the country” – a perfect gift for the amazing woman in your life.