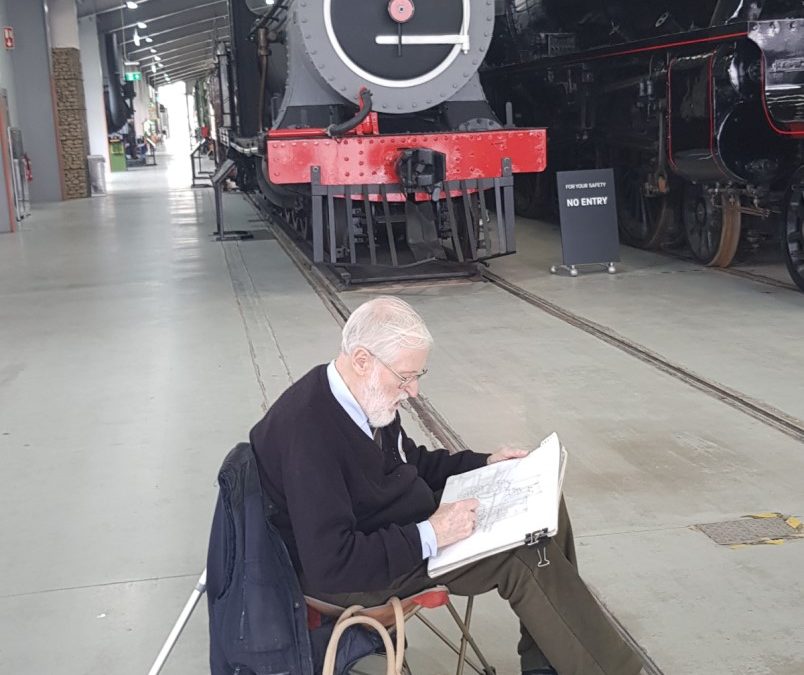 John Wigston is a renowned railway artist and a member of the Guild of Railway Artists. We are thrilled that he has painted a beautiful watercolour for us and today we went to collect it. With John’s consent, we have called it ‘A New Era Dawns’ and it features Locomotion No.1, the Royal George and Victory outside Hackworth’s House in Shildon.

It is already being turned into high quality A4 prints ready to be framed in your own home and used to make greetings cards. These should be for sale within the week. Next year we will also use ‘A New Era Dawns’ on mugs, tea towels, place mats and coasters. We reckon it will be a best seller.

John is best known for his watercolours of steam locomotives and he is one of a very few railway artists in the Guild to specialise in early locomotives. He was born at Redhill, Surrey in 1939, but spent most of his early life in Chingford, Essex. His work for ICI on Teesside brought him to Hartlepool (his wife Vilma was from the North East) and he now resides in Weardale where he continues to paint. Today he was surrounded by paints, pencils, and various commissions all in different states of readiness. Classical music blasted out from his radio, but soon this was switched off so we could talk trains, art, politics and religion over a cup of tea.

John had his first one-man Exhibition at the Gray Art Gallery in Hartlepool in 1970. Many exhibitions followed, including the Museum of British Transport, Clapham and Doncaster Art Galleries. The 1975 150 S&DR Celebrations brought a commission from the Tourist Board for a painting of ‘Locomotion’ which in turn led to more commissions from Barclays Bank, the North of England Development Council and one from as far as Canada.

Marine painting is also an important part of his work. H.M.S. Warrior, the world’s first iron battleship is one of his major subjects and he mounted an exhibition aboard the ship during its restoration at Hartlepool. He has also completed a commission from New York of the American liner ‘Constitution’. In the summer of 1996, he was artist in residence on the QE2 on a transatlantic passage to New York and later commissioned by Suitzer Tonnage Ltd, for a painting of their tugs with the QE2’s last departure from Southampton. He has also worked on a series of watercolours from the famous Cunard Liners ranging from the 1880’s to their present-day fleet.

However, anything driven by steam fascinates him and in recent years he has enjoyed the company of traction engine enthusiasts. This has led to paintings of these wonderful machines in their various forms from industrial, agricultural and fairground scenes.

The original watercolour painting will be sold by John Wigston sometime soon. If you think you might be interested in purchasing it, let us know!