Making Middlesbrough and the Genius of Hackworth 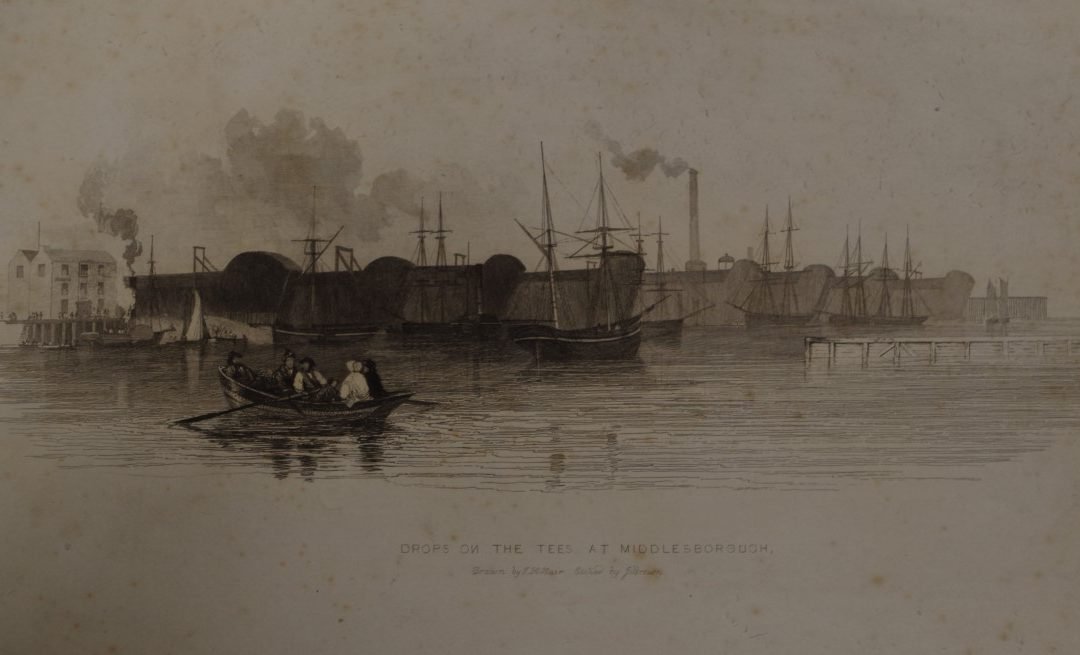 The new Middlesbrough branch of the Stockton & Darlington Railway was formally opened on the 27th December 1830 with a train of passenger coaches and waggons hauled by The Globe – a new locomotive designed by Timothy Hackworth specifically for hauling passengers. The new coal staithes on the banks of the River Tees were tried out then 600 entertained at dinner in the specially decorated gallery of the staithes. There were free rides, refreshments, the firing of guns, and ‘great demonstrations of joy’. The staithes were lit by portable gas – the first ever burnt in Middlesbrough.

So what were the coal staithes and how did they work?

In January 1829, the Stockton & Darlington Railway Company advertised for plans for the construction of shipping staithes and mechanised coal drops, offering premiums of 150 guineas and 75 guineas for the best two designs.[1] The coal drops were to assist in the moving of coal from waggons brought to site by train and then load coal on to ships ready for export to London. The process had to be quick to allow as much coal as possible to move through the site and prevent bottle necking and the coal had to be transferred with a little delicacy to stop it breaking into smaller parts on dropping from the staithes into the ship as this would reduce the value of the coal.

On the 20th April 1829, the S&DR sub Committee reviewed the twelve plans submitted and Timothy Hackworth’s were accepted.[2] This was ratified in July 1829 at the annual meeting of shareholders and Hackworth received the £150 award. Hackworth was instructed to find an engine suitable to lift the coals from the staithes to the ships and a number of options were explored and costed. The S&DR chose the engine at the Glebe Colliery as being most suited for this purpose and Hackworth was instructed to obtain the best terms for the Company.[3] The building to house the engine was built by William Burn and other buildings at Middlesbrough by Robert Richelieu.[4]

Hackworth’s staithes allowed 6 ships to be loaded at one time; the laden waggons being run onto a cradle and then lifted by steam power from one of two engines on to a platform or staithe 20ft high, from which coals were lowered by coal drops to the ships, a labourer descending with each waggon, undoing the fastening of the bottom, allowing the coal to drop into the hold. A contraption set the descending empty wagon and labourer down on to the rails on the staithe and carried off to a siding.[5] An observer in 1836 (by which time there were 8 coal drops) noted that waggons were discharged at a rate of one in two minutes with most of this time being taken with the descent and ascent of the waggon. The result at this speed was coal being loaded at a rate of 21 1/5 tons per minute. [6]

On opening, the engine and machinery were in the charge of Thomas Greener who had worked on the Etherley Incline in 1825-6 and then followed George Stephenson to the Liverpool & Manchester Railway to help in its construction. The whole operations were managed by William Fallows who had been appointed agent to the Stockton & Darlington Railway at Stockton in 1829, and who, in 1831, became a permanent resident of Middlesbrough, where for fifty-eight years he played an active role in his community including becoming one of its mayors and justices of the peace.[7]

Work on six staithes was finished by the end of October 1830 and work on new staithes started in October 1832 bringing the number of coal drops up to eight.  They were designed to match the existing ones with random stone walling, but with a few minor modifications to improve structural stability.

The coal drops and staithes were described in glowing terms by George Head in his ‘Home Tour’ of 1836:

‘The extraordinary length of the building appropriated to the coal staithes, four hundred and fifty yards long, or thereabouts, by means of which all the shipping operations are conducted close to the water’s edge under cover, renders it, at first sight, a remarkable object, and the more singular inasmuch as the laden coal-waggons are, in the first instance, raised by a steam engine to the upper floor, and then lowered again to the vessel below, – a circuitous application of additional labour, than which it certainly appears a more direct mode might have been devised.’

Head’s description of the working of the staithes and coal drops by pony is of particular interest. He described the half a dozen laden wagons being dragged together along the railroad to a particular drop then….

‘….at work by a stout cob, which is then ridden carelessly back again bare backed, by a small boy, at a shambling trot, notwithstanding that the interstices between the planks admit here and there full two inches of daylight. However the pony proceeds, clattering on unconcernedly, otherwise than holding his nose close to the floor, the better, and more cautiously, to observe where to place his feet at every step….The beast when I witnessed his performance, had only a halter on his head, without winkers, or any harness except collar and light rope traces. As soon as the boy had fastened the hook of the trace to the foremost waggon, the pony invariably turned round his head, as if to inquire whether all were ready, and then exactly at the proper moment commenced his march, the load meanwhile rumbling after him; arrived at the drop, the carriages being detached, he here stood jammed close to the wall; showing perfect cognizance, as the carriage passed him, of the degree of attention due to the various noises and manoeuvres going forward, and not only being aware when it was proper to step out of the way, but how long precisely it was safe to stand still.’

These coal staithes designed by Timothy Hackworth fell out of use in 1842 when the company built a new enclosed dock less dependent on the tides. In May 1843 they were offered as locations for shipyards and shops in return for rent providing the tops were repaired with some planks of wood.  The Middlesboro Lime Company offered to take two of the divisions under the old staithes for their lime providing that the S&DR Company would place a small land crane on the end and allow the lime to be weighed.  By the 1850s the old staithes area was being used by the Teesside Iron Works and the Patent Fuel Works.  Three coal staithes were still in use (one of which was a later one) as was the Packet Wharf, the sidings and the barracks or cottages built in 1830. By the 20th century the site was still being used as an iron works.  Today the site of the staithes and the sidings that led to them is Dawson’s Wharf and is used for freight movements by A. V. Dawson who continue the tradition established by the S&DR in 1830 of using this site to export and import freight from the Tees.

In addition to the Middlesbrough coal staithes and the passenger locomotive The Globe, Hackworth was responsible for many innovative engineering ideas that helped to the make the Stockton & Darlington Railway a success. To see our Hackworth Collection of gifts made just for us and which celebrate Hackworth’s contribution to engineering, visit our web site https://www.therailwaystation.shop/product-category/gifts/hackworth-collection/