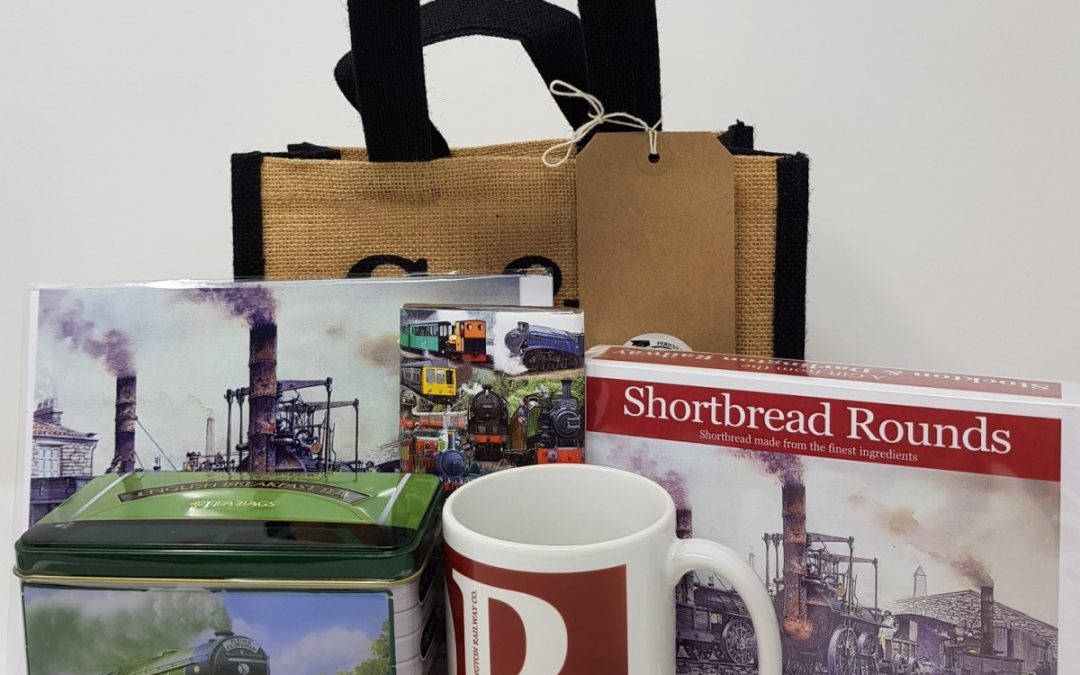 Our hamper is back and this time we have opted for a tasty tea inspired treat consisting of:

This got us thinking back to the bad old days of railway catering. Actually, they weren’t all bad. I remember the GNER restaurant car to London in the 1990s when decent food and a bottle of wine helped the journey whizz by. But it took a long time for railway companies to provide food on board. And don’t get me started on the toilet provision, especially for women!

The S&DR had railway taverns along the line from 1825, with three especially commissioned by the railway company in 1826, joining the privately built one at the end of the Yarm branch. These had multiple uses which varied from place to place, but all provided hospitality in the form of drink, while some were also hotels, delivery offices, waiting rooms and shelter. Not all customers were travelling on the train, many travelled by horse and cart to purchased coal, lime and other goods from the depot adjacent and enjoyed the benefits of hospitality before returning home.

According to Simon Bradley in his The Railways. Nation, Network & People, eating on board was a do-it-yourself arrangement until the 1860s. While railway journeys were relatively short, passengers could easily manage without. But as the network spread, food and drink had to be carried on board if you wanted to eat when hungry rather than when the train stopped at a suitable station. If your drink of choice was tea or coffee, then it would be at ambient temperature because the thermos flask wasn’t produced commercially until 1904. So, there was some advantage in taking ‘a little cold wine or brandy and water’ as suggested in The Railway Traveller’s Handy Book written by Edward Shelton and published anonymously in 1862.

So, what might be in a hamper in the 1860s? Well, ham or beef sandwiches were a simple option suggested in the Handy Guide. Spiers and Pond in London tempted travellers with its own biscuits, cakes and ices in the 1860s on the Metropolitan Railway at Farringdon Street Station; their offer was so good that non travellers chose to dine there too. Soon Spiers and Pond expanded and could be found at stations on the Midland line. In 1871 they introduced luncheon baskets containing half a chicken, ham, bread and butter, cheese and a half pint of claret or stout. Seeing how well this was going, the Midland Railway started doing their own baskets, with different options for different budgets. The L&NWR also started to produce luncheon baskets ranging from the Aristocrat to the Democrat.

Hot food started to appear from 1884 according to Bradley, again on the Midland Railway. Orders were telegraphed ahead and boys employed to call out passengers’ names at the platform so they could be handed their basket. Breakfast baskets and tea baskets, costing about one shilling, were also available and contained bread and butter, cake, biscuits or chocolate.

Although referred to as a ‘basket’, this was not always the case. After the First World War the contents were delivered in a decorated box of waxed cardboard. From about 1906 on board eating began to be favoured and the basket/box/hamper gradually declined. The Second World War finished it off completely leaving box rooms, store cupboards and garages littered with old hamper baskets and boxes to be reused for picnics, storage and packed lunches.

As an aside, I heard something interesting recently from a colleague at Historic England. I had been researching a railway inn commissioned in 1826 by the Stockton & Darlington Railway in Darlington. It is remarkably well-preserved but downstairs a couple of rooms have been knocked together and a large bar inserted that stretches from one end of the inn to the other. This was an insertion by regionally renowned architect G. G. Hoskins in 1898. According to my colleague, these large bars were made necessary and consequently fashionable in Victorian times thanks to the railway. Why? Well, when refreshments were only available at designated stopping stations on a long journey, bars had to be able to serve a large number of customers at once, resulting from the rush of customers arriving by train.

This sounds plausible, but now I’d like to see the comparative timeline for the provision of large scale toilet facilities. After all, what goes in, must come out……