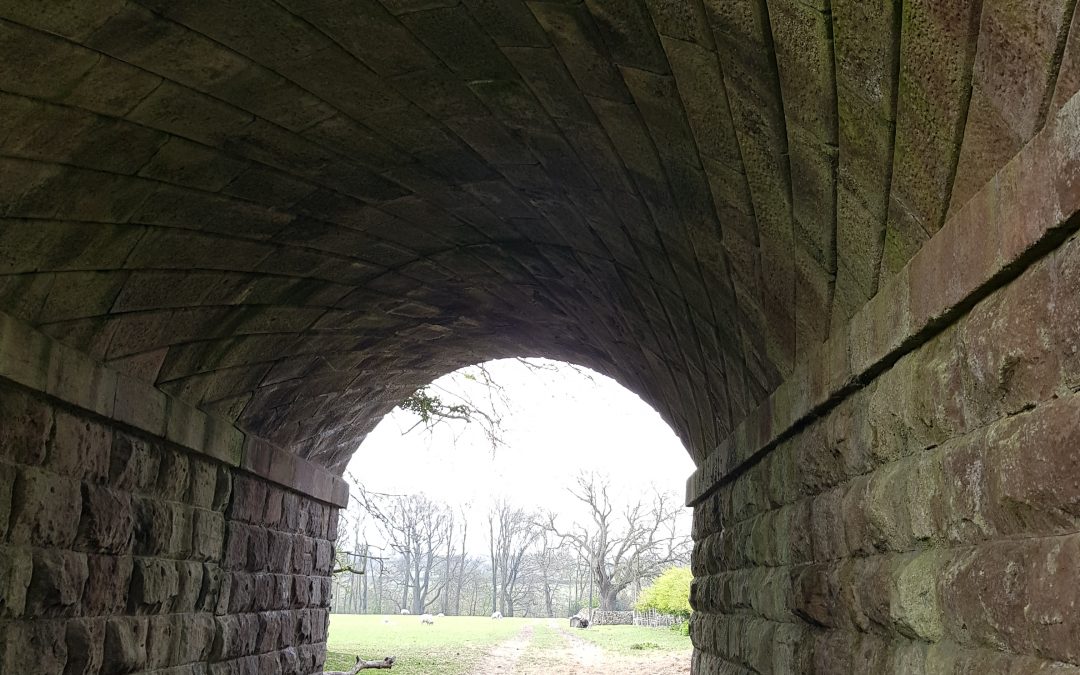 Have you ever walked beneath a skew bridge? They are beautiful to behold and they look very complicated to build.

So what is a skew bridge?

This is an early, little known method of constructing bridges to cross an obstacle at an oblique angle or skew instead of at a right angle.  From underneath they look a little like an unfurled toilet roll tube. This method of construction means that the usual principles of sideways forces in the arch no longer acted at right-angles to their abutments and importantly to the keystone. If the skew was excessive, the force across the face of the abutment could be enough to make the bridge unstable.

Although skew arches had been used in the past including in bridges associated with canals, it was still innovative when the railways created a need for such bridges. The earliest railway skew bridge (in the world?), built in 1829, is at Rainhill for the Liverpool & Manchester Railway and designed by George Stephenson. It carried traffic over the railway (the A57 today) and it has since been altered with one parapet replaced.

The Stockton & Darlington Railway Skew Bridge of 1830 over the Gaunless on the Haggerleases branch line is intact. Locally it is also called the Swin bridge which is a local name for skew. It carried the railway over the river and is therefore possibly the first skew bridge in the world to carry a railway. It was designed by Thomas Storey of the S&DR who was related to George Stephenson by marriage and joined the S&DR at his behest.

The contract for the work had initially been let on the 12th February 1830 to two stonemasons Thomas Worth and John Batie at £327[1] but after piling the foundations and laying the lower courses of masonry, they gave up. Either the construction of a skew bridge was just too complicated or they lost confidence in its ability to stay upright! The the contract had been awarded to them on the condition that the bridge was built ‘according to scientific principles, to be liable to be discharged on a weeks notice in writing’. This suggests that the railway company had some doubts about the cheapest quote being the one most able to meet the complex specification.

In the end it was James Wilson of Pontefract who was awarded the contract to complete the works at an increased cost of £420.  It is this company’s name that can be seen on a difficult to see stone tablet on the outside of the north parapet. Sadly it is also difficult to admire the stone work here without getting your feet wet.

The S&DR and other railway company’s went on to build such bridges wherever the obstacle it had to cross was on an angle. The 1861 skew bridge which carries the South Durham and Lancashire Union Railway between Barnard Castle and Lartington is a lovely example which was widened ten years later, also on the skew.