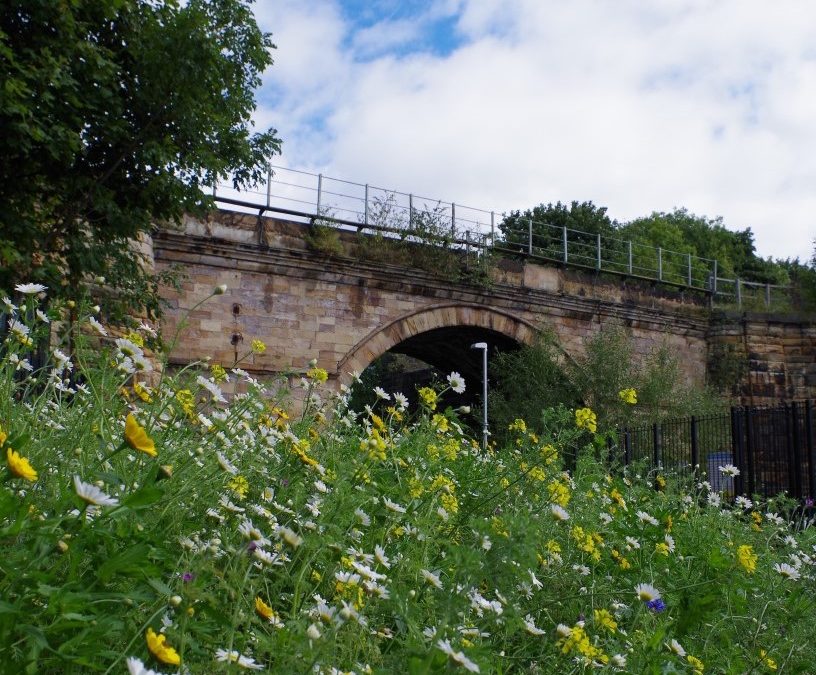 On this day (6th July) in 1824, the foundation stone for the Skerne Bridge in Darlington was laid by Francis Mewburn, the Stockton & Darlington Railway Company’s solicitor. This was the largest engineered stone-built structure on the line and technically one of the most challenging (along with the Gaunless Bridge at St. Helen Auckland).

George Stephenson was initially commissioned to design it, but the task was eventually handed over by the S&DR Committee to Ignatius Bonomi the Council Architect and Surveyor of Bridges who advised on the design and oversaw the works of the contractors appointed by the S&DR. The S&DR in turn appointed Ralph Day to inspect the stonemasonry work in 1824-25.[1]

It is a fine example of Georgian masonry bridge design: an elegantly proportioned structure that was sensitively completed with restrained embellishment referencing the desire for simplicity from the main Quaker railway promoters. Bonomi filled in the valley from slope to slope with masonry except for three arched gaps – a wide central one for the river to pass through and narrow pedestrian passageways on either bank.

Notes written by Bonomi give an indication of how the bridge was built:

“There will be about 3000 cubic feet of stone in the arch and I think it might be wrought at the quarry providing a little extra care is taken in putting the blocks when wrought into the carts. As the blocks are large, they need not, I conceive, be piled upon each other. They should be laid upon straw or turf…straw bass worked up loosely would suit best…” (From Bonomi 2.11.1824 and quoted in Crosby 1987, 45)

“I hope that the offsets of the foundations may be found to project a little within the great arch in order to get a stool for the support of the centring. The two sole trees upon which the uprights are supported should be of oak and it would also be proper to put a piece of oak between the top of these uprights and the beam which reaches from wall to wall…The whole of the arched stones should be prepared and be on the spot before centring is fixed; it is not proper to suffer the weight of the stones to hang partially upon the wood, which weakens the centring…The masons who set the pens should be provided with large mells [mallets] to drive them well up and it is moreover a good plan to wedge them and keep them wedged until the next course comes on and so forward; the arch cannot be too tightly set at first. It will certainly tighten itself when the centring is eased, but if it has too much play, the form of the arch will be distorted…” (From Bonomi 3.11.1824 and quoted in Crosby 1987, 45-6)

The early strengthening works in 1829, necessitated by the railway carrying significantly higher tonnages of traffic than anticipated, were principally designed to strengthen the earthwork approach embankments rather than to address deficiencies with the bridge itself. These strengthening works added concave wing walls to either side of the arch.[2] These alterations were designed and carried out by the Railway Company’s part-time inspector of works and designer of buildings, John Carter. Further alterations were made in 1832-3 as part of the doubling of the mainline line. This process was nearly complete by July 1832 on the rest of the line, but the Skerne Bridge and the Tees Bridge were the last to be doubled.[3] It is therefore this widened and strengthened bridge that features in later paintings of the structure such as John Dobbin’s Opening Day of the Stockton & Darlington Railway, painted probably in 1875.

The bridge underwent further widening works in the late 19th century. These works obscured Carter’s wing walls and replaced them with chunky, rusticated walls and buttresses of non-matching stone that flank Bonomi’s unaltered central portion of the bridge today. The bridge was also widened on its N side and this new N elevation wholly hid the earlier bridge.[4] Fortunately the view of the bridge that survives is the same elevation as seen in Dobbin’s painting. The widened area of the bridge is no longer used as traffic has reduced considerably.

We celebrate the Skerne Bridge with our Skerne Bridge collection of gifts featuring the bridge in its early days. You can find them all in one place here.

[1] TNA RAIL 667/30 July, November and December 1824 (a brief interlude when he was dismissed for disorderly conduct in December, but re-appointed)