The World’s first Planned Railway Town is due a Rebirth 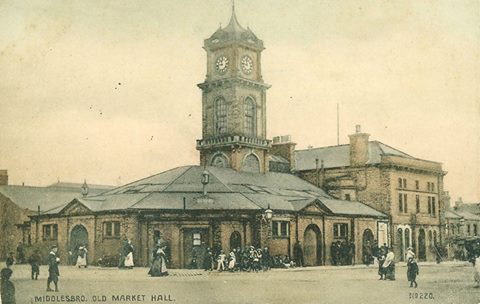 Having seen a recent planning application to redevelop one small part of the St. Hilda’s area of Middlesbrough and more recently, media coverage by Andy Preston, the Executive Mayor of Middlesbrough, that the Old Town Hall is to be developed, it seemed like an opportunity to remind ourselves, just how historically significant this area is.

Middlesbrough before 1830 comprised a farm surrounded by swampy marshland. Earlier it had been the location of a monastic cell originally founded in 686 A.D. and dedicated to St. Hilda. This later evolved into a church and cemetery.[1] This association with St. Hilda would much later, provide the name for the earliest part of the new railway town of Middlesbrough and its new church of St. Hilda built in the 1840s.

When the Stockton & Darlington Railway opened in 1825 with its port at Stockton, it soon became clear that the port was struggling to meet demand. Sandbanks and silting caused ships to ground resulting in complaints from ship owners. A number of alternatives were considered, but in the end the deeper waters downstream and the swampy marsh land near the farm of Middlesbrough was chosen as the site of a new port, with a new extension to the mainline running from Bowesfield near Stockton along the south bank of the Tees.

Despite opposition from the House of Lords and largely due to the powerful influence of the S&DR shareholders, the Committee and Joseph Pease in particular, the Act for the Middlesbrough extension received royal assent in May 1828.[2]

The new Middlesbrough branch of the Stockton & Darlington Railway was formally opened on the 27th December 1830 with a train of passenger coaches and waggons hauled by The Globe – a new locomotive designed by Timothy Hackworth specifically for hauling passengers. The new staithes were tried out then 600 entertained at dinner in the specially decorated gallery of the staithes. There were free rides, refreshments, the firing of guns, and ‘great demonstrations of joy’. The staithes were lit by portable gas – the first ever burnt in Middlesbrough.

It was clear that housing and other facilities were going to be needed for the workers now required to operate the port and the branch line. The site of the existing farmhouse, already known as Middlesbrough,[3] was the best and driest location for building as it was positioned on higher ground (this raised ground can still be seen today).

Plans were set out by the Railway Company’s surveyor Richard Otley in 1830 to demolish it and the associated buildings and replaced them with building plots set in a grid pattern of streets around an open square.[4] The bones of former parishioners in the old churchyard were carted away to make room for the new town.[5]

The building plots were offered for sale prior to the staithes being built in February 1830. Consequently, when the new branch line was opened in December 1830, the new railway town of Middlesbrough was already growing. The first house was built by a joiner Mr George Chapman on West Street in April 1830 and the first child to be born in the new town, John Richardson Chapman, was born there on the 22nd August that year.[6] The new town was provided with a design brief in 1831 setting out the dimensions of the houses, doors and windows with the purpose ‘of preserving some uniformity and respectability in the houses to be built’.

By 1841 the population had soared to 5,463 with 877 occupied houses, 62 uninhabited houses and 36 in the process of being built. The wider parish also included people living in barges and tents. Of this population, 2,272 had come from outside the county attracted to the new town by work created by the S&DR and growing industries.[7]

The old farmhouse was demolished in 1846 by the new owner Robert Manners, an innkeeper. During the demolition, fragments of the Norman Priory that once occupied the site were found.[8] The site was then used for the Middlesbrough Hotel.

The buildings in this planned new town were sadly demolished between the 1960s and 2000, but the surviving street plan offers another opportunity for a new design brief to provide low costs and social housing and/or self-build plots to create a new distinctive residential area that reflects the important history of St. Hilda’s.

Plans are now afoot to redevelop parts of this – the world’s first planned railway town and to conserve and reuse its original town hall. Good luck to Middlesbrough Council and the Tees Valley Combined Authority. These are exciting times – let’s do the S&DR’s Middlesbrough legacy proud and get it right.

Read our full report (by our sister company Archaeo-Environment) on the Middlesbrough branchline and the creation of Middlesbrough, carried out for Middlesbrough Council, here.https://www.middlesbrough.gov.uk/sites/default/files/Planning-Middlesbrough-branch-line-report-2018.pdf