Tribute to a Tea Pot 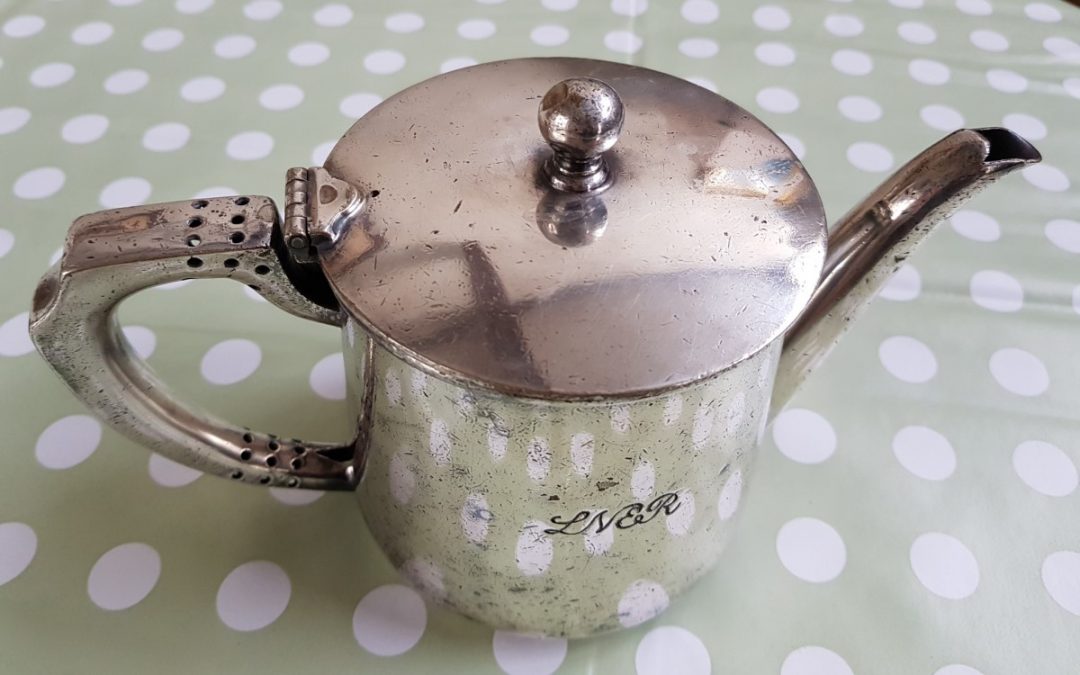 In our house, we have two expensive modern teapots. Both drip when the tea is poured leaving papers, biscuits, coasters and tea trays swimming in Yorkshire tea. For Christmas, yours truly was given a LNER silver plated teapot by her doting spouse. This teapot is a non-dripping wonder; an icon of style and practicality.

The LNER teapot was made by Walker & Hall, Sheffield and dates to between 1923-48. It is a sturdy 12.5 cm high. It has the LNER monogram on its right side. Its flat bottom makes it stable and less likely to be knocked over. It weighs 750 grams – that is quality stuff with gravity on its side. You wouldn’t want it to land on your foot though. It if was nudged, the lid, with its delightful round knob and hinge over the handle, is a secure fit, keeping the tea securely inside. A tiny hole on the lid just in front of the hinge, lets steam out. The handle has holes in it at the top and bottom parts nearest the body of the pot to dispel the heat, so while it is warm to pick up it doesn’t burn your hands. Internally, the spout is soldered to the main body of the pot with a series of holes for catching the tea leaves. A fine job it makes of it too, as few escape into the clutches of the tea strainer.  It holds nearly two mugs of tea, just right for one person. At a time when tea was served in cups and saucers that was nearer four cups of tea that could have got you from Darlington to York. Most importantly it doesn’t drip!

The tea pot has dents and dunts, scratches and markings, each one the archaeological evidence of life in the buffet car. Sturdy enough to withstand rapid washing and drying, throwing around on to shelves and tea trays, filling with boiling water and having its lid flipped carelessly and clumsily by many a waiter. Decades of hard work on trains, a quiet life in storage and on a shop shelf, then packed and posted it is now returned to working order and its marriage with the tea leaf. It just needs a little milk jug friend (hint hint).